Latest general meeting of the AAAI 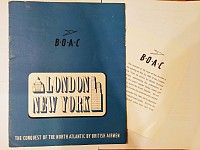 Tim noted that the Jiscmail list had been established and had in the region of 100 subscribers.

3.1 Mike spoke to this.  He reported that the guidance had been completed in the early summer and was now online.  He noted that it required some case studies and accompanying documentation and should be seen as work in progress.  Feedback had been positive.

The meeting thanked Mike for his excellent work and noted that it was an example that other subject-based groups could modify and use themselves.

3.2 Following on from this, Mike reported that he was now involved in organising a Land Transport Archives project.  As with the AAAI, it comprised archives and museums, collectors, societies and organisations, and researchers.  It had been inspired by and drawn on the work of the AAAI (including repurposing the AAAI guidance).

4.1 Alison spoke to this.  She reported that there were 65 entries for aircraft manufacturers in the survey so far.   Each entry included a brief company history, a list of principal aircraft types produced, and information about where archival material relating to the company was known to be held.  Through the Air Britain Trust the company histories and lists of aircraft were in the process of being checked.

Alison thanked the Air Britain Trust, Ron Smith in allowing her to use information from his British Built Aircraft series of books, and Barry Guess in providing her information from BAE Systems.

4.2 Alison said she hoped there would be around 75 entries ready to mount online in January 2021.  It would probably initially be mounted in pdf or word-processed form on the AAAI website.  It might be also possible to mount it in database form online through the Royal Aeronautical Society.

The meeting thanked Alison for her work, which represented many, many hours of voluntary work.  It was agreed that she would send all members of the steering group a copy of the survey to date.

4.3 Alison noted that once the aircraft manufacturers archive survey was mounted online, the next steps would be promote it, sustain it and develop it.  It was agreed that where appropriate those involved in the Initiative would be encouraged to add online links to the survey from their websites.  It was hoped that having the survey online would encourage others, particularly smaller museums and societies and researchers to offer information about archives of which they were aware, so building up the survey.  However, thought would need to be given to its long-term sustainability.

4.4 The meeting discussed the possible extension of the survey into looking at the archives of airlines.  Malcolm said that the Air Britain Trust had compiled full information on the histories of British airlines on a CD/DVD, which he would be willing to let members have copies of.  He was thanked for this kind offer.

5.1 Tony spoke to this.  He reported on plans for Chris Bartlett to host a virtual webinar from Rochester Avionics Archive comprising an illustrated talk on Elliotts, and the work of the Archive, followed by a Q&A session.   This would take place before Christmas.  Webex was discussed as a possible platform.  Nina and Philippa offered to assist with this event.

Howard said it was important that the AAAI continued to expand its network to reach more people and organisations with a potential interest.  It was noted that this would alert us to the existence of contacts and material that we would miss through more formal channels.

This led on the discussion of heritage material at risk.  The question was raised whether the AAAI should be offering advice on collections at risk, and if so, how this service would work.  Philippa introduced the Business Archives Council’s Crisis Management Team as one possible model.   After discussion, it was agreed to set up a sub-committee to consider this further and report back.  Philippa and Malcolm volunteered to sit on this.

Howard said he would be leaving the steering group at the end of October. He introduced Jonathan Harmer as his successor for BAE Systems.  The meeting welcomed Jonathan and thanked Howard for his work for the AAAI since its establishment and wished him well for the future.